This is a legacy with breadth. Ron Rempe, by all accounts, was that type of person.

His contributions varied in scope. From the grandest scale — Ron’s engineering company designed the Saddledome’s iconic roof — to those on the smaller side. For instance, the model-train course running through the family home, a layout that included tracks set into the ceiling.

“An all-round incredible person. He was such a presence, always talking to us about finding things we were passionate about. None of us are into video games. It’s such an artistic, creative family.

“Every Sunday morning, I can still remember, we’d wake up and he’d be down in the kitchen with some different CD on — whether it would be Mexican, country, bluegrass, jazz, rock and roll. Always some different genre.”

For vacations, the Rempes would pile into the family roadster and hit the highway, driving to Toronto, to nearly every state south of the border. Time was never wasted.

“We’d be listening to music and sightseeing, trying different foods and going on adventures,” said Steph. “We’d bring our guitars and recorders and we would play everywhere we went.

While Steph and her twin sister, Alley, were playing hockey for Brown University in Providence, Rhode Island, and the youngest kid, Matt, was attending the Okanagan Hockey Academy in Penticton, B.C., Dad died of a heart attack. He was 61 years old.

The family was rocked. The aftermath, profound.

Matt, 15 years old at the time, had been shattered, understandably.

Trying to make some sense of the tragedy, he took stock of his own life. Stepping back, one of his conclusions was that he had been spinning his wheels in hockey.

“I’m not going to lie — I was a pretty average player looking back at those stats,” Matt said the other day. “I just decided I want to be something for my dad. I have such a great bond with him. He taught me a lot. I had a really good relationship with him. I think that helps in a way. I don’t know how to word it. He cared a lot about me and I know he knew I loved him.

“I look at it like my dad’s gone and I can’t do anything about that, but he set me up for success. That’s something that’s made me feel hunger and made me mature a lot. Yeah, it sucks, but it’s helped me a lot.”

It’s hard to dispute the success of his past two seasons.

At 16 — after being the last cut at WHL Seattle’s camp — he skated for the Spruce Grove Saints of the Alberta Junior Hockey League.

This past season, he cracked the Thunderbirds’ lineup. Through 47 games, he produced 31 points, progressing from the third line to the first, earning the club’s most-improved-player honours along the way.

“Dad was always the one who was at the rink, the one who was always going over Matt’s games with him, looking for opportunities, coming up with the next thing,” said Steph. “I mean, our mom (Janice) is an incredible supporter, but she’s having to play Mom and Dad now. So I think Matt having to figure out this process — without that Dad figure in the loop — has forced him to grow up a little bit. He’s matured and learned a lot. In some ways, he’s put all his effort into that as a way to cope.

“It would have so easy to go, ‘I’m going to quit. I’m going to go play video games. I don’t really care.’ But for Matt, it was kind of like, ‘You know what? Now I don’t have someone there the whole time. I’m mad. This shouldn’t have happened to me. This is another setback.’ In some ways, he (channelled) all that energy and was like, ‘I’m going to become the best I can be.’ He became so dedicated.”

And yes, leading up to the 2020 NHL Draft, the home phone is ringing.

“It’s funny,” said Steph, laughing. “Before it was like, ‘Oh, what solicitor is calling?’ But now it’s like, ‘What NHL team is calling?’ Which is pretty fun. I’m super excited for him.”

Often, little boys chase big brothers into hockey. Or they get nudged into the game by the old man.

For Matt Rempe, it meant following his sisters. Then trying to keep up, because Steph and Alley, four years older, were very good very early.

Neither parent could skate, so it was left to the twins to help him.

“It was a special thing,” said Steph. “We always found ways to be on the ice with each other. He wanted to be faster, he wanted to score more, he wanted to do all these things.”

Said Matt: “I just wanted to be like them. They were really great role models. I love them so much. They’re so huge for me. I have to thank them for that.” 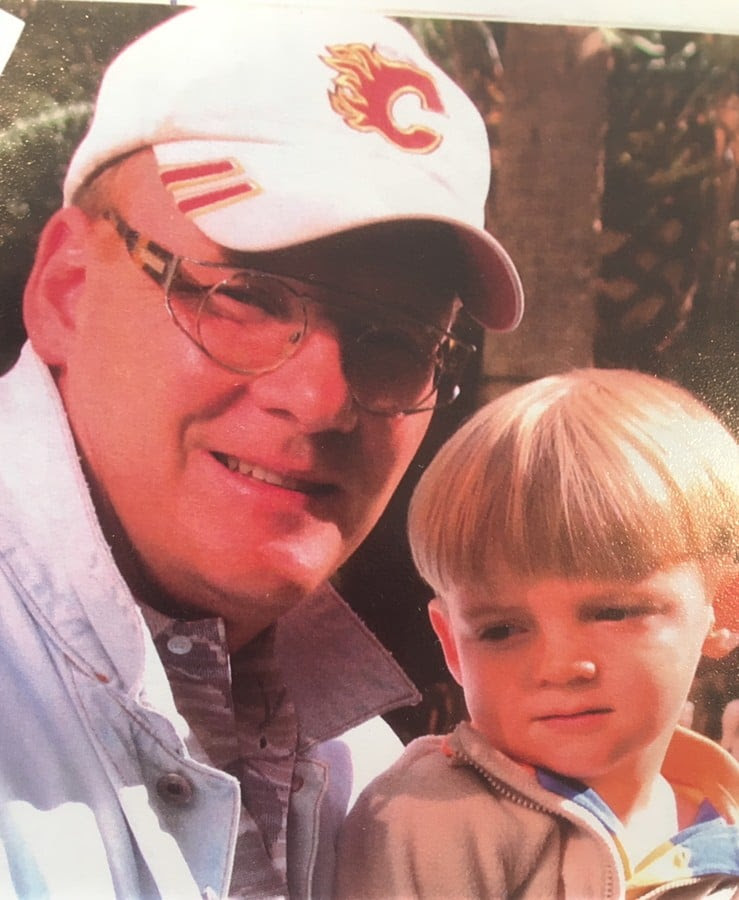 His dad was a Flames season-ticket holder, so the gang often went to games. No surprise, the boy loved Jarome Iginla — who didn’t? But he also had a soft spot for Adrian Aucoin, the hard-shooting defenceman who managed to do his damage old-school. “He used a wooden stick — I always thought that was so cool,” said Matt. “I found that so interesting. Everyone else had the nicest sticks and he’d always use a wood one.”

Snack time at the Saddledome followed a well-grooved routine — a round of malts in the first intermission, then Twizzlers and popcorn in the second. Not that Matt had to worry about getting chubby.

His game, though, began to show signs of progress.

On the home front, there were indicators — yes, finally catching up to those twins.

For him, anyway. Steph laughs. “A few years ago it was pretty easy to beat him one-on-one. Now, we go on the ice with him and it’s, ‘Holy, man,’ and we get destroyed.”

After a Double-A season in Calgary, Matt spent two winters at the Okanagan Hockey Academy. Just days after the WHL draft came and went without a call, the Thunderbirds reached out. Falling just short at Seattle’s camp, he spent the 2018-19 season in Spruce Grove where he collected a dozen points.

“Obviously, playing with older guys,” said Matt, “it was really great for my development.”

After growing three inches last summer, he earned a spot in the Thunderbirds’ lineup, even if team brass was unsure of where the 17-year-old would slot.

“They were saying, ‘OK, you’re going to be more like a bottom guy on the team,’” said Matt. “But I improved and improved. I blew away all expectations. I was playing top minutes. They weren’t expecting that. I’m much more of a late-bloomer.”

His point-per-game production ended up third best on the squad. And, for someone with Size 14 feet, he moves.

“With how big I am, if I can skate well, it’s hard for D-men to contain me,” said Matt. “I took another step. Later in the year, I gained a lot of confidence, so I had the puck more on my stick.

“I was really happy with my year.”

Failing to notice had been Central Scouting. Among the organization’s top 241 prospects in North America, he does not merit a mention.

By this stage of his adventure, though, Matt is unfazed.

“I don’t really care,” he said. “I was surprised, but that’s another thing I can use as motivation. It was disappointing. But whatever.”

Matt laughs. “Just like ‘The Last Dance’ with Michael Jordan — if you see something’s wrong, you use that for motivation.”

And there’s plenty from which to draw.

Undrafted. No exposure to national — or even provincial — teams. No elite stream. No special attention.

“That taught him discipline — he doesn’t have this huge ego,” said Steph. “His accomplishments mean a lot more to him. So very much, he’s had to carve his own path … and he’s deserved it. He’s on this exponential curve.

“It is kind of wild. He’s definitely been on quite a journey. I’m super proud to be an older sister of him.”

Typically, his birthday, June 29, falls a few days after the draft.

This year, though, the NHL’s annual prospect bonanza is set for Oct. 9 and 10. But this kid is hardly rattled by post-pause unknowns.

“If you would’ve told me a year ago that I’d be in the position I am today, I would have said you were lying,” said Matt. “I’ve outworked a lot of people. My goal is to pass everyone — everyone who’s been taken above me, get better every day and pass them.”

It’s all perspective. This offseason may seem long and drawn out to some teens. To Rempe, it’s an opportunity.

To gain strength. To add pounds.

“Actually, I’d want to see what I’d be like at 245 because I think that would be a good weight, said Matt. “But I want to stay fast. I don’t want to put on too much weight and lose a step, because speed is part of my game.”

“I’ve got to hit that and that’s a lot,” said Matt. “Sometimes you get sick of eating.” 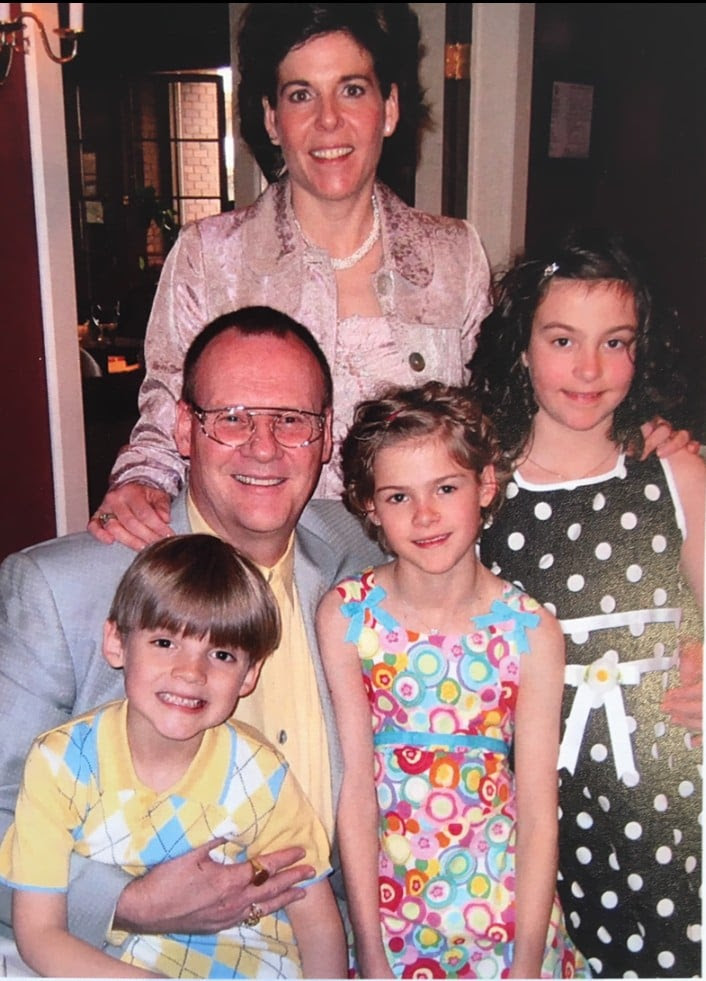 Neither of Rempe’s parents could skate, but all three children wound up pursuing hockey at a high level. (Photo courtesy of the Rempe family)

He keeps it healthy, too, for the most part. Once in a while, he’ll sneak in a night-time bucket of Ben & Jerry’s — The Tonight Dough is a favourite. “I love some ice cream. I don’t feel that’s the worst for you.”

Steph remembers, years back, Matt flexing his upper body for family members, showing off his six-pack. “And it was like, ‘No, Matt — those are called ribs.’”

But the commitment is unwavering, according to his sisters, high achievers themselves, who are inspired by his drive.

“This morning, he was up at 7 to go work out. Then he was on the ice. And I know he’s got yoga planned for tonight,” said Steph. “Really, he doesn’t do anything else but train. It’s honestly insane. He’s outside shooting pucks, he’s running, he’s training, he’s working out, he’s eating healthy. He won’t touch alcohol. He won’t eat desserts. He wants it so bad.

“It’s pretty impressive to see your little brother have such a passion and desire.”

“That’s a good height — there’s no players, other than Zdeno Chara, and no centremen that big,” said Matt, who admires the game of Adam Lowry, 6-foot-5 pivot of the Winnipeg Jets. “I feel like I play a different style of game than most people. That’s what I feel attracts a lot of NHL teams. I really like that.”

From Dad, he also inherited an expansive collection of cologne. “So now all the ladies think I smell good.” Also his now is a gold chain that his dad never took off. Matt, for a while, wore it everywhere. But for fear of losing — or wrecking — the necklace, it stays in a safe place now. “I just look at it.”

A keepsake that all the kids enjoy is a selection of 330 songs, entitled “Ron’s Playlist” and curated by the man himself. On a recent trip to Penticton, it’s what the family listened to, according to Steph. “We all have it on our phones.”

This past season when the Thunderbirds got players to submit their favourite tracks, Matt suggested Led Zeppelin’s “Kashmir.”

“That’s one of the songs from the playlist,” he said. “They’re all old, really old. Like ‘Mack the Knife’ and stuff like that. They’re old songs, but I love them. Rock. Blues. Classics. That’s what my dad listened to. I think it’s cool.”

Song choices are varied enough that Matt can use a few to get energized before puck drop.

The playlist — with its touching connection to his dad — also has the power to bring comfort.